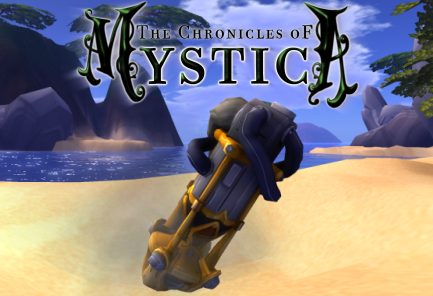 If you take a look at the Map you can see that we’ve revealed quite a few of the exotic and magical location of Mystica, and we’ve found some really exciting things there! Within those lush landscapes and unique environments, you’ve found;

..And now the beautiful Thornblossom!

I am often asked why it seemed that the most people got from their starter packs were the Longshadows and the Dark Burrows. True to the fashion of the Story, the Mystic pods that were transported to our players came from one place- just one.

Yet, at this moment, it was a mere 722 Fendul Tails (or 46 Earth Miles) from reaching the Staralis Desert, where a small Magic creature known as the Mystics left their Petalpods of their unborn to warm in the Sun. Thousands of them, nestled in the tall yellow grass. It was their Bourning Season, after all, and each lay directly in the path of the swelling Gray.

So, it was from these hatching grounds that all of our original Mystics, as babies, were transported from for their safety. That they were all similar would be expected to start, but once we began exploring the stories within did we reveal the relationships with other geographical domains, from extreme and hostile climates to beautiful and lush environments.

But, there is still so much to see.